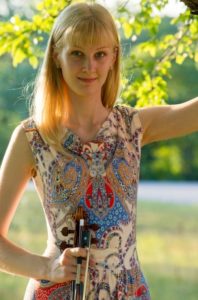 Taisiya Sokolova attended the Colburn Academy for Young Artists. She then received her Bachelor of Music from Indiana University South Bend and Master of Music from Indiana University Jacobs School of Music. She has studied with Atar Arad, Li-Kuo Chang, Luis Vargas, Paul Coletti and Elena Ozol. She also participated in master classes with Yuri Bashmet, Sven Arne Tepl, Jurgen Kussmaul, Nobuko Imai, Paul Neubauer, and Martha Katz. Taisiya is a prize winner of numerous competitions, such as MTNA State Competition in 2014 and 2015, Imperial Symphony Orchestra Young Artists competition in 2014, and the International Competition “21st Century Art” in Kiev, Ukraine in 2009.

Taisiya has performed in Russia, Turkey, Israel, Germany and USA.  Taisiya made her debut as a soloist with the Imperial Symphony Orchestra in Lakeland, Florida in March of 2014. In August of 2015, she has appeared with the Philarmonic Orchestra of the University of Alicante in Perugia, Italy. She is also an avid chamber musician, and appeared in festivals such as Heifetz, Red Rock Music Festival, and MusicFestPerugia. Additionally, she also played with orchestras such as Columbus Indiana Philharmonic, Terre Haute Symphony Orchestra, LaPorte County Symphony Orchestra, and Symphony of the Lakes. As an educator, she believes that early music lessons benefit children’s development and is passionate about teaching young kids. She plays on a Viola made by Eric Benning in Los Angeles.