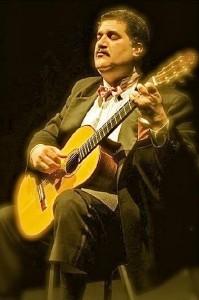 Having just recently completed a series of 14 concert performances as a featured soloist with the Joffrey Ballet, guitarist Steven Suvada has appeared as a soloist with over 30 different symphony orchestras across the country, including the Miami Beach Symphony (playing the Concerto in D, Op. 99 by Castelnuovo-Tedesco), DePaul University Symphony at Orchestra Hall (Concerto in D major by Vivaldi), the Civic Orchestra of Chicago (Concerto de Aranjuez by Rodrigo), and the Harper Symphony Orchestra (Concerto in A major, Op. 30 by Giuliani). Having performed in music and fine arts festivals across the country, Suvada’s performances have taken him to such venues as Orchestra Hall in Chicago, Milwaukee Performing Arts Center, and the Folger-Shakespeare Theater in Washington D.C. He has appeared on TV and radio innumerable times, including “Weekend Edition” on WLS TV (ABC Chicago) and WNIB FM/Chicago. This past summer featured outdoor performances at music festivals in Minnesota, Ohio, Indiana, Iowa, Kentucky, Wisconsin and Illinois in front of crowds as large as 250,000.

Suvada started studying jazz guitar at the age of 7 and at 13 he started the commute to Chicago every Saturday (with his Dad), to study with Richard Pick. Having completed both his Bachelor’s and Master’s Degrees at DePaul University under the guidance of Pick, he has performed in master classes for Manuel Barrueco, Charlie Byrd, Eduardo Fernandez, Lawrence Ferrara, Tom Leisek, Jeffrey Meyerriecks, Jorge Morel, Joe Pass and Myrna Sislen. In addition, he has given master classes at colleges and universities throughout the country, including Elmhurst College, Harper College, Loyola/Chicago, Rochester College (Minn.), Kings College (Penn.), University of West Virginia, and North Carolina State University. January of 2000 marked the release of his CD, “The Interludes”, in which he performs solo guitar works composed by Richard Pick. The CD is available through internet retailers Amazon.com, CDNow.com, TheOrchard.com, CDuniverse.com, CD Baby.com, iTunes, Napster and BarnesandNoble.com.

As a composer, Mr. Suvada was a finalist in the OTI International Composers Festival (finishing third), and has had one of his works featured in the national magazine, “Second Avenue”.