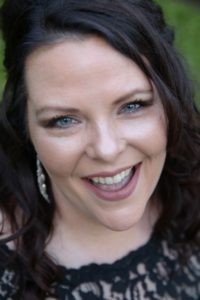 Rebecca Wilson holds BM & MM in Voice Performance from Ashland and Roosevelt Universities, DMA in Voice Performance from Univeristy of Illinois Champaign-Urbana. Ms. Wilson has been hailed as a “staggeringly talented singer” by St. Louis Magazine. Rebecca sang to critical acclaim as Gutrune in Götterdämmerung with Union Avenue Opera. In 2015, Rebecca’s concert appearances included Oceans Apart: Wagner and Gomes United in Music with Opera Dolce, as well as the soprano soloist in Vaughan Williams Dona nobis pacem with The University of Illinois Urbana-Champaign Choir and Orchestra under the baton of the esteemed Dr. Andrew Megill.

Rebecca has also worked professionally in musical theater. Rebecca performed at the Showboat Becky Thatcher for two consecutive summers. There she was seen in The Fantasticks, Alas Alack, Zorro’s Back, and Barry Manilow’s The Drunkard, as well as being a featured singer in other performances. Rebecca has also been seen on Chicago’s theatre front, including the opera singing the role of Serpent in the Joseph Jefferson nominated Seashore and Quest Theatre’s Blue Nativity (in which she appeared as the Narrator for 3 consecutive years).

Rebecca has received numerous awards for her singing, particularly 1st, 3rd and Honorable Mention in the National Teachers of Singing program. She also placed as semi-finalist in the Bel Canto Foundation Scholarship Program, winning a Bravo Award the following month (2005); the next year Rebecca was a finalist in the contest, finishing 3rd (2007). In 2015, Rebecca was awarded a Gerda Lissner Foundation Grant, and was a finalist and award winner at the Lois Alba Aria Competition.