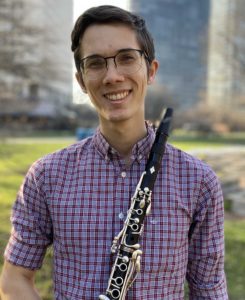 Michael Thompson is a clarinetist that brings a modern energy to the performance of classical music. Currently an Associate Member of the Civic Orchestra of Chicago and a freelance performer and teacher in the Chicagoland area, Michael eagerly looks forward to what will come next in music and in life.

Though having grown up in Petersburg, KY, Michael has been a member of groups across the nation, including the Civic Orchestra of Chicago (Chicago, IL), the University of North Texas Wind Symphony (Denton, TX), the Fillmore Wind Band (Cincinnati, OH), and the Hot Springs Festival Orchestra (Hot Springs, AR).

As a finalist in the 2019 George Papich Chamber Music Competition Competition, recipient of the UNT Excellence in Chamber Music Award, participant in the 2020 Fresh Inc contemporary music festival, and member of several international chamber music collaborations, Michael has had an equally varied career in small ensembles and solo performance. Michael continues to seek out new performance opportunities, venues, and groups.