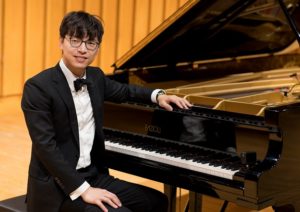 Li Laiji is a pianist from China where he received his Master in Music, in Piano Performance from Northern Illinois University (NIU). He is a proud member of Phi Kappa Phi Honor Society and the Golden Key
International Honor Society.

Li studied the piano under associate professor Mr. Chenyang Dong in Hangzhou. Li ranked in the Top 10
in the 2014 Zhejiang Province College Entrance Examination for Overall Music Majors. Li achieved the
Top 1 in the Composition Major, and Top 2 in the piano performance major in the nationwide Zhejiang Conservatory of Music (ZJCM) Entrance Examination. After receiving the Excellent Freshman Scholarship, he continued studying under Mr. Dong at the piano department of ZJCM. He earned several awards and scholarships, including the First Prize in the Fifth Session of the “Simon” Cup Zhejiang Province College Student Piano Competition, and the first prize of Outstanding Student for excellent academic scholarship from ZJCM. In 2018, Li completed his bachelor’s degree in piano performance and was nominated for postgraduate recommendation. The same year, Li was offered a full Graduate Assistantship by NIU under
Dr. William Goldenberg. He was the winner of the 2018 and 2019 Donald L. Walker Living Legacy Fund. In 2022, Li was awarded his master’s degree and performer’s certificate from the NIU School of Music. Li has been coached by Dr. Robert Hamilton and Sean Chen since 2021. Li obtained instruction from famous pianists such as Evgeny Kissin, Shizhen Yao, Kirill Gerstein, and Frederick Moyer during his study career.

Li is active in piano performing and musical activities. Li was nominated as a student representative of ZJCM and attended the reception activities of the New Zealand Ambassador to China. Li has performed at not only the First Outstanding Students’ Concert of Zhejiang Conservatory of Music, but also several concerts, including piano solo recital and piano lecture-recital. The musicians whom Li has cooperated with included Brian Losch, Dan Nichols, William Goldenberg, Chenyang Dong, and Zhipei Liu. Li started working as a private piano teacher in 2014. Li was the manager of the piano part in the brilliant program “Easy to Learn Music” which was selected as “The 2017 Chinese National University Student Innovation and Entrepreneurship Program” by the Ministry of Education of China. Li served as an accompanist at Northern Illinois University between 2018 and 2020. In 2018 through 2022, Li adjudicated for the Chicago Mid-America Chinese Music Festival Piano Competition. In 2020, Li was appointed as a major instructor of the Group Piano Class for undergraduate students and a tutor of Piano Pedagogy Class, supervised by Dr. Kim at NIU. Li had a piano masterclass at NIU and was highly praised.

Li’s performance is vibrant and exciting. As a piano teacher, he helps students to improve their piano skills through targeted training. Also, he likes to use vivid language to demonstrate performance skills. He also introduces some popular music and film music to increase students’ interest in playing and their expressive ability.