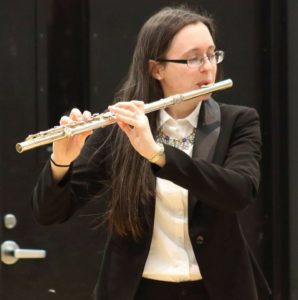 Leah Stevens is a National Flute Association competition winner, being named First Prize in the Orchestral Audition and Masterclass and Second Prize in the Piccolo Orchestral Audition and Masterclass at the 2017 National Flute Association Convention in Minneapolis, MN. She currently holds the position of Principal Flute in the Salomon Chamber Orchestra, an up-and-coming chamber orchestra in Terre Haute, IN. Leah has also been named runner up for the Lexington Philharmonic Principal Flute audition, and a finalist for auditions with the Indianapolis Chamber Orchestra, Huntsville Symphony Orchestra, and Lincoln’s Symphony Orchestra. She has won First Prize in the Flute Society of St. Louis Young Artist Competition and Honorable Mention in the Music Teacher’s National Association Young Artist Competition at the state level in Nebraska. She was a finalist in the University of Nebraska-Lincoln Graduate Concerto Competition both in 2013 and 2014, and a winner of the Southern Illinois University at Edwardsville Wind Symphony Concerto Competition in 2011. Leah has also performed as a soloist with the Florissant Valley Symphony Orchestra. ​

As a teacher, Leah enjoys working with students of all ages, levels, and backgrounds. She currently works for The People’s Music School in Chicago, IL, an organization that strives to provide music education to underprivileged children. She is on the team of their Greater South Side outreach in Grand Crossing. Leah also works for Noteable Notes Music Academy in Wheaton, IL. She has been a clinician for the Flute Society of Saint Louis Annual Flute Day and All-District Clinics.

An avid performer of new music, Leah has given world premieres of several works within the last year in Chicago, namely Drew Baker’s Nox and Eliza Brown’s A Soundwalk with Resi at the Ear Taxi Festival in October 2016. Leah has worked with the University of Nebraska-Lincoln New Music Ensemble to give the School of Music premiere of Terry Riley’s ‘In C’ in November of 2014. In 2013, with the Southern Illinois University at Edwardsville Flute Choir, Leah played on the premiere performance of Kim Archer’s “The Piney Woods of St. Tammany Parish” at the National Flute Association Convention in New Orleans, LA.

When not performing or teaching, Leah is an active member of the Flute Society of St. Louis, serving on their Board of Directors and as their Webmaster. She is published in the October 2016 issue of Flute Talk Magazine, in an article discussing her personal journey and various factors on choosing to go back to graduate school.

Leah is a grantee of the Friends of Flutes foundation, and she has performed in master classes for esteemed artists Jeanne Baxtresser, Jim Walker, Alberto Almarza, Ian Clarke, and Carol Wincenc.