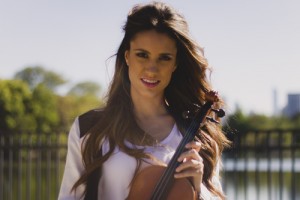 Kassia Frantz is a native of Green Bay, Wisconsin. She began her piano studies at age four, and soon after began the violin at age seven. After studying both instruments intensively for a number of years, she decided to focus her attention on the violin.

At age fourteen, she began to study the violin with Eugene Purdue in Madison, Wisconsin. Over the course of the next few years, she was involved in several summer music programs including Midwest Young Artists in Lake Forest, IL, where she studied with members of the Pro Arte Quartet, David Perry and Sally Chisholm, and Meadowmount School of Music in New York where she studied with violinist Gerardo Ribeiro.

During her time in college, Ms. Frantz also dedicated much of her time to teaching. In 2009, she co-founded a music program in Green Bay designed to allow under served young students to study music. She has remained the violin teacher for this program since 2009, returning to teach a three-week intensive program twice a year.