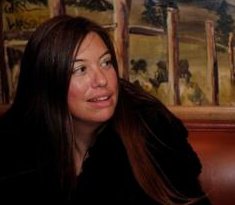 Margret Dahlberg began playing the piano as soon as she could crawl up onto the bench. Before being able to read words much less musical notes, she was making up story-songs to match the illustrations in her family’s piano books. This childish pastime, she believes, gave her a great foundation for not only note improvisation, but musical interpretation as well.

In 5th grade, Margret also started playing the trumpet. In high school she studied both instruments at the prestigious High School for the Performing and Visual Arts in Houston, Texas. As a senior, she was awarded the piano department’s Chopin Award for most outstanding senior pianist.

After graduating, Margret left the urban metropolis of Houston for the small rural town of Grinnell, Iowa in order to attend Grinnell College where she had hoped to become a chemist. Her love of music, however was a strong enough pull to keep her out of the chemistry lab and in the practice rooms. Her senior year, she won the school’s competitive concerto competition, and as both soloist and member of countless ensembles, was named the “most performed” student of her class.

After receiving her BA in music from Grinnell, Margret then moved to Seattle, where she focused on piano performing with Dr. Peter Mack at Cornish College of the Arts. Because of her studies with Dr. Mack, she was able to enter Northwestern University where she studied with Dr. Marcia Bosits and received an MM in piano performance.

After Northwestern, Margret returned to Seattle where she taught group and private piano lessons at Cornish College, accompanied extensively, and set up a private teaching studio. She eventually moved her studio to the tranquil Victorian town of Port Townsend, Washington where she also rediscovered her love of the trumpet, performing in the community orchestra as well as a local polka band. In Port Townsend, she became an organist for Grace Lutheran Church, co-owned a small award winning café, the Blue Moose Café, and was active in the community theater musical productions.

Not quite ready to settle down completely in a small town, Margret relocated to Chicago where she is not only on the faculty of AMI, but also runs her own creative arts space, Studio303a, and is the music director for Northlake Lutheran Church. In addition to teaching other people how to play piano, Margret has been teaching herself upright bass and performs in the German Schlager band “Pieptone!” She also plays piano for the alt-country band “Mollybird”, and has her own act as “Me & Kay”. Throughout her eclectic performing career, people have always noted that she plays with exuberance, musicality, and personality. This is something she attributes to those early days of creating imaginary worlds on the keyboard when playing piano was merely child’s play.